Found a great blog today thanks to a customer of ours. Ms. Peach did a write up about Anne Taintor Flasks and directed her readers our way. Thanks again Ms. Peach!

Check out The Peach Tart Blog when you get a chance. It is a lot of fun
Posted by YouNeedADrink.com at 6:25 PM No comments:

Email ThisBlogThis!Share to TwitterShare to FacebookShare to Pinterest
Labels: Flasks, Observations, Things that Make Us Laugh

What You Eat Standing Up Doesn't Count - Beth Barnes 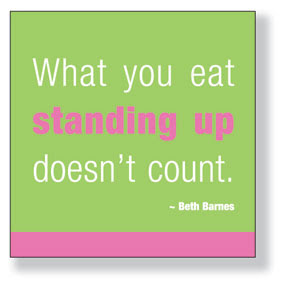 Beth went on to say that about 25 years ago she threw a wonderful large party at her home. She looked around the room and no one was eating all her wonderful food that she worked so hard to prepare. So she announced to the crowd, "Everyone, What You Eat Standing up Doesn't Count! So eat!" She was trying her best to encourage everyone to eat. She said that she just thought of it off the cuff. How clever she is!

It turns out that one of the guests at the party was a woman who had a daughter who wrote anthologies. The daughter wrote an anthology on food and Beth's comment was included in the book. Luckily she was given credit for her clever line. And since that book came out, Beth's clever words have been on cards and other items. She was so excited that her words were also included on cocktail napkins.

I was so excited to hear the story. Beth Barnes made my day.
She went on to say, "It's my only claim to fame".
To which I replied, "I think that is a pretty big claim to fame!"

Thanks Beth for sharing that story. I enjoyed it very much.

And yes, I'll work on a nice discount for you. It is the least I can do!
Posted by YouNeedADrink.com at 11:53 AM No comments: